Pride around the World: Iceland

The island nation of Iceland is often referred to as one of the most LGBT-friendly countries in the world. It’s considered a beacon of diversity where over a 100,000 citizens, a third of the total population, attend the annual Reykjavík Pride Parade. But it hasn’t always been that way. In fact, very little information about the nation’s LGBT history prior to 1970 has been found, as many were most likely too afraid to speak out, and those who did had their stories altered.

This silence held until 1975 when local celebrity Hörður Torfason left the country after being ostracized for coming out as gay. This event was the last push needed to bring the movement to the starting line in 1978 when the first and now national queer organization in Iceland Samtökin 78’ was formed, propelling the movement into the spotlight.

The group fought long and hard for 18 years, staging campaigns, public protests and debates to gather support from the citizens as well as gay rights organizations in other Nordic countries. This dedication is what brought Samtökin 78’ to its first major win, the legalization of Registered Cohabitation for gay couples nationwide in 1996. General anti-discrimination laws, adoption and the first Reykjavík Pride came next. On June 27, 2010, Prime Minister Jóhanna Sigurðardóttir walked down the wedding aisle, the day same-sex marriage became legal.

While Iceland has become a peaceful place for the LGBT community, many of the locals don’t believe that their work in improving the situation is over. Samtökin 78’ and the government are currently working together to strengthen the rights of transgender individuals in the nation. They’re also collaborating with institutes such as the University of Iceland to provide more education to the public on the subject. 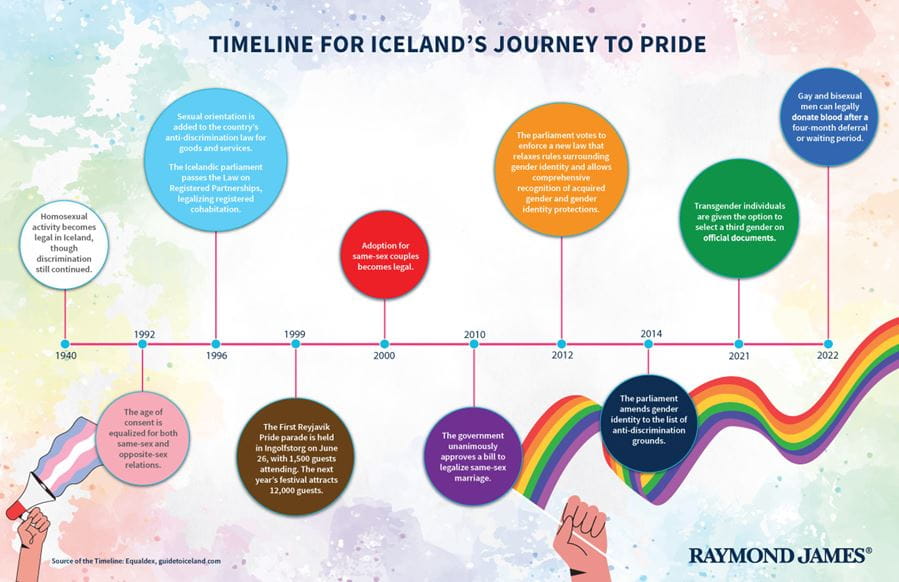 Did you know that in June 1997, 2,000 people took to the streets of Sao Paulo, Brazil to protest discriminatory laws against the LGBTQ community in that country? More details coming up next week where we discuss Pride in Brazil.

what can we do for you?

Please click on the link below to stay connected via email.

*You can withdraw your consent at any time by unsubscribing to our emails.